skip to main | skip to sidebar

Hop on the Straddling Bus

People--children and adults--often ask writers where their story ideas come from. I certainly don't know the answer to this question. They come to me as I write, as I mow the lawn, as I drive my car, as I'm talking with some person I just met or have known all my life. They just pop into my head ready to be explored.


It's why I ask my English students to free write most class periods. It's why I urge (and yes, require) them to brainstorm on a topic before beginning a story, essay, or poem. A person never knows what she can remember, invent, or connect; it's a magical, unpredictable thing, human imagination.


I was reminded of how wonderfully innovative human beings are as I read about China's "straddling bus" idea. It will look something like this (courtesy of nydailynews.com): 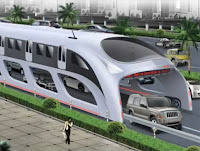 The passengers ride above traffic and the train glides on tracks running parrallel to the highway. It's an eco-friendly (solar- and electricity-powered) mode of transportation that reduces traffic congestion. Looks like something out of Spielberg movie, right?


I have no clue if this straddling bus will work. People seem confident, though. I just think it's another example of humans using their imaginations. I know that the idea for this straddling bus came from the same place as Spielberg's science fiction and storywriters' plots. And if it came from there, maybe it can take me there, too. It's a bus, after all.

The cost of a ticket is time--allowing myself time to brainstorm.

It's thrilling, isn't it, living in a world full of such wondrous ideas? Next time you sit down to write, whether it's an essay, a story, or anything else, remember the straddling bus. Hop on that bus. Join me on a trip to that place called Imagination, where gosh-wow cool ideas reside.

Where to Find How I Got Rich Writing C Papers

Where to Find Skipping Stones (online)

Where to Find Dizzy Fantastic (online)

Where to Find Slingers